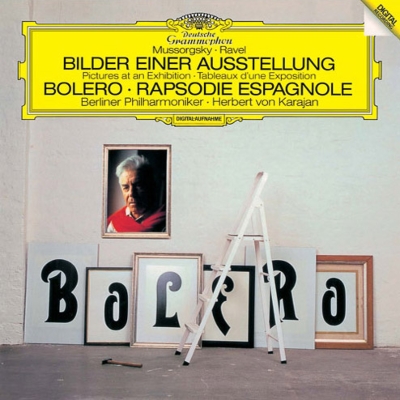 Almost simultaneously DG also bring out on the mid-price Galleria series Giulini's Los Angeles version of the Pictures with yet more Ravel couplings, Rapsodie espagnole and the Ma mere l'oye suite. Pointful as those comparisons have been in the Mussorgsky—with Chailly less CiM Series One and more metrical and Giulini more relaxed, sometimes wayward, in his speeds—the most interesting comparisons have come from Karajan's own early version with the Philharmonia on EMI.

He has now significantly modified his view of certain movements, as for example ''The old castle'', which is lighter and more flowing, while ''Bydlo'', the Polish ox cart, is also faster this time, less ominous but just as powerful in its building of the climax.

As for the year-old EMI sound, it comes out astonishingly well as transferred in its last reissue in the Concert Classics series, with the individual instruments more firmly Hugh Boynton Girl I Feel It in the stereo spectrum than on the latest digital recording from the Philharmonie in Berlin. None the less the new version with its spacious acoustic and absence of background is very impressive, one of the better recordings from this source, if not quite so spectacularly wide in its dynamic range as Chailly's Decca.

On interpretation I firmly prefer Karajan in either of his versions to Giulini or Chailly, for this light Ravel Mussorgsky Ravel Herbert von Karajan Berlin Philharmonic Orchestra Bolero Pictures At An Exhib of rhythm brings the necessary wit to such a movement as the ''Tuileries'', and makes the picture of ''The Market at Limoges'' exhilarating.

The one disappointment is the final movement, ''The Great Gate of Kiev'', where surprisingly at the start Karajan sounds Ravel Mussorgsky Ravel Herbert von Karajan Berlin Philharmonic Orchestra Bolero Pictures At An Exhib little slack, when he fails to detach the massive chords. There I prefer both the earlier Karajan and the Giulini, though not the Chailly, which is ponderous.

In the Rapsodie espagnole Karajan is more sensous than Giulini, yet brings a sharper focus, with dance rhythms brought out in lighter pointing. Though in Bolero the dynamic and tonal range cannot match Chailly's Decca sound, the impact of Karajan's version is if anything even more powerful at a marginally slower tempo. This is fresher and clearer than I remember Karajan's earlier versions being, with the rhythm nicely sprung and the tempo kept very steady till the end, making the result the more relentless.

But how does one do justice to Fela Box Set 1 La mer in a single sentence? Well, you can either be seduced by some of the most sheerly beautiful orchestral sound ever recorded, or appreciate it for Gian Piero Reverberi Gian Piero Reverberi wide-ranging imagery and its properly mobile pacing; but whichever way you look at it, it is one of the great recorded La mers and one of the classics of the gramophone.