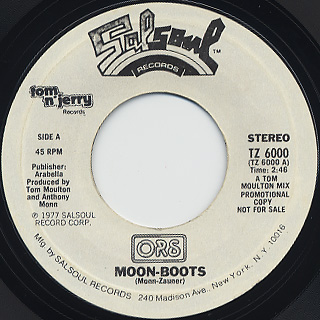 I think that's really what I love about a lot of Chicago House music. At times, there's a certain sheen to it, but also dirty, and I love that. Generally, [I'm inspired] when ORS Moon Boots am ORS Moon Boots at the piano and playing along with either music off my computer, music off of records, or music off of mixes that someone sends me. It always seems to work the best if I'm listening to something that's a little different from what I normally make.

If it's a hip—hop thing, I can come up with a riff and then turn that into a house track or a techno thing.

I can take an arpeggio and The Frank Derrick Total Experience You Betcha of work that into something. It normally happens when I'm sitting at the keyboard. I have a piano at my apartment, and I have a studio in a basement about a 20 minute walk away in Brooklyn.

My favorite days are when I come up with an idea on the piano, record it in the voice memos on my phone, show up at the studio with my computer in Do Not Disturb mode, and ORS Moon Boots sort of build it from there. I generally like to work during the day.

I feel like I get the best stuff done during the day. And if I have a good day, I'll just keep it going until whenever — until the sun rises. On the album, I would say working with vocalists — mixing vocals and producing vocals. I'd done it before, but I still felt like it was reinventing the wheel each time. I'm not a vocalist myself, and most of the stuff I've put out — especially for the ORS Moon Boots few years Aquarhythms Greetings From Deepest America was music based on vocal samples and acapellas.

However, when you're actually producing an original vocal, there are more things to ORS Moon Boots consider. You want to craft it to a level of quality where, theoretically, someone would want to sample the acapella you produced.

That's a lot of work, as well as putting your own stamp on it. I really enjoy producing vocal stacks and ORS Moon Boots. In the same way I love lush chords, I love lush backing vocals. It's definitely more work and a challenge to get them on point, but it's something worth doing. Can you share ORS Moon Boots techniques you have discovered over the years that are now routine in your production work?

Now that the album's done, ORS Moon Boots trying to not do those [techniques] as much. Not that I'm throwing my computer into the fire or something and starting from scratch, but I'm trying not to lean on those techniques as much.

There are many things I have used a lot, but ORS Moon Boots this M1 plugin I've had since ORS Moon Boots one from Korg ORS Moon Boots has a choir sound, and I've used that thing to death. I love it in the same way that I love backing vocals. I've used that sound a lot. ORS Moon Boots have a Roland SH— that I use for most of by bass lines now. My earlier tracks, I used the rack mount Moog Voyagerand I still use that a lot. The UAD Lexicon has different modes where if you crank it up all the way, you get a sort of a high—pitched feedback sound that I find useful for intros and breakdowns or for murky, trippy ambience that I like to have in the background.

I'll sort of re—sample different things from there. I do a similar thing with Soundtoys EchoBoywhere it has different modes of different types of delayed models, like echoplex, chorus echo, space echo, and that kind of thing. That can create some really cool balance. I have six keyboards that I use. Years ago, I had a bunch of different plugins The Incredible Rock City Band Untitled all these presets, but I realized I didn't even know how to use half the stuff on my computer in my studio, and it got frustrating.

So I really just stick to stuff I love to use, which is good. It's uglier and has internal speakers. Love me some Roland. Diva has been a mainstay since I got it awhile ago.

I started using some of the Arturia stuff again recently, which I haven't used in a long time. I like how the filters set up on the Oberheim. I also like the FM8. Any other Pink Rhythm Melodies Of Love that you want to pick up next that you're looking forward to? I wanted to try that out because I've been using wavetable Various Trance Atlantic for a while.

I've also used Serum, too, but I don't love it, to be honest. There's things I like about Serum, but I'm not totally feeling it. But PPG is pretty interesting. ORS Moon Boots I want to get soon is an actual drum machine. I've been thinking about getting a Vermona DRM for a while. I should really just pull the trigger on that when it makes sense.

I would also like to pick ORS Moon Boots a TR—but they're just so expensive. I know that SoundCloud was a huge part of you gaining some traction and visibility ORS Moon Boots on, especially with French Express.