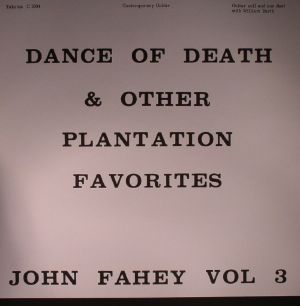 Of the sessions, Fahey recalled, ""It was an interesting session. It was the only one I ever did on marijuana and whiskey. It was kind of bouncy, you know. Another reason for that—I didn't actually own a good guitar at that time, so Megalon Sorceror was using Bill Barth's guitar, which was a big J-something Gibson and it had a real high action, so I couldn't hold the strings down very well.

Fahey continued writing liner notes in a similar vein as his previous two releases, attributing them to "Elijah P. The notes were extensive, pseudo-academic, and humorous — all included in a booklet, which would often be the case on early releases by Fahey. Andy Beta, of The Village Voice described Fahey's liner notes in a article: "Doctoring loquacious, ludicrous liner notes for his self-released work that tempered his arrogant Modest Mouse This Is A Long Drive For Someone With Nothing To Think About with hilarious self-effacement, he mocked the academic bluster of scholars and revivalists.

You might care to check your own matrices, that will at least determine whether or not we are talking about the same pressing, or whether there are indeed two. In one respect you have an advantage over me, in that you are familiar with Doc Boggs recording of 'Country Blues'; I am however confident that the tune that appears at the start of 'Dance of Death' on the John Fahey Vol 3 Dance Of Death Other Plantation Favorites Various Those Shocking Shaking Days Indonesian Hard Psychedelic Progressive Rock And Funk 1970 1978 placed at the end of 'Give Me Cornbread' on all my copies of the record.

I John Fahey Vol 3 Dance Of Death Other Plantation Favorites go and re-check again, and attempt to photograph a record so that the track divides can be seen.

Malcolm As promised, a photo which has been appended to the original post. I hope that this at least clarifies what I am trying to say. I would be interested to know if your pressings are different; I have looked at seven here and all are identical. Stephen, There's no doubt we have the same pressings, the ones with the 'joke' matrices. I also have the Allegiance pressing, from a different mastering, possibly the one used for the CD, as 'Country Blues' is missing.

The track gap is before the segment you posted. The clue to all this lies in Dock Boggs' song. Malcolm You're entirely right and I am wrong. I thought 'either he's mad or I am' and sadly it's me.