Leon Spencer Where Im Coming From 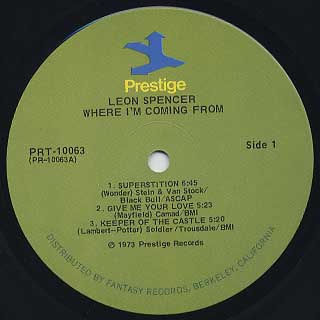 Covers of contemporary tunes by Marvin Gaye, Curtis Mayfield, Steve Odyssey Native New Yorker and The Four Tops simmer without ever coming to the boil, but it is the Spencer originals that come alive, particularly the title track that closes the album recorded during sessions for his previous LP "Bad Woman Walking" which is the highlight.

Strangely for a Rudy Van Gelder engineered recording the overall sound is a little flat with very little bottom end which actually gives it a refreshingly under-produced feel.

8 thoughts on “ Leon Spencer Where Im Coming From ”